The Most Amazing Relationships in the Ocean

From the Ocean to the human body, nature is full of symbiotic relationships. Derived from the Greek ‘sym’ and ‘bios’ translated as together and life, biologists and ecologists have researched how species interact whilst intimately living and working together. These fascinating bonds are great examples of the intricacy of natures ecosystem.

What is a Symbiotic Relationship?

A symbiotic relationship is defined as an intimate interaction between two or more biological organisms, which may or may not help the other. These organisms or ‘symbionts’ can either entirely depend on each other for survival or can live independently without the other.

There are 3 major types of symbiotic relationships;

Commensalism exists between two living organisms, where one organism benefits from the other without harming it. We see this relationship between Whales and barnacles; barnacles are a type of sedentary crustacean, belonging to the same class as lobsters, shrimp and crabs. They are believed to be one of the oldest surviving animals on earth and although some barnacles are classed as parasites, the type that attach themselves to the whales are filter feeders.

By cementing themselves to the bellies and backs of Whales, they benefit from the availability of plankton which the Whales swim into to feed. They filter plankton into their bodies through holes in their shells. As the whales are constantly moving, the barnacles don’t suffer greatly from predators such as starfish and snails. This in contrast to those attached to wharves and piers and other stationary objects, is another benefit to their attachment to these giants.

The sheer volume of barnacles a Whale can host without suffering is impressive, a typical humpback whale can host 1000 barnacles without an issue. In some rare cases, the barnacles can cause skin irritation and drag to the whales but in most instances, this is a perfect example of a commensalism symbiotic pairing, as the whale has no burden from their presence, and the hitchhiking barnacles thrive on their mobile counterpart. Diving with humpback whales (and their barnacles) is possible in Western and Eastern Australia during the Whale migration.

Unlike commensalism which can sometimes be difficult to quantify, parasitic relationships occur all the time within the ecosystem and are easily defined. Parasitism is a relationship between two species of plants or animals in which one benefits at the expense of the other, sometimes without killing the host organism.

Parasites commonly found on reef fish are called isopods or copepods, they are small crustaceans similar to crabs and are a type of marine louse or ‘fish lice.’ 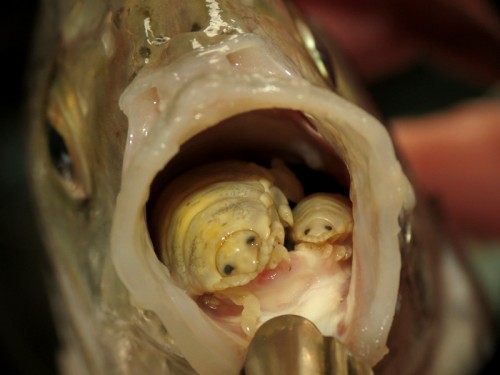 Truly inspiration for a horror movie, the Cymothoa Exigua is a marine Isopod that removes the tongue of its fish host. The Isopod slips into the fish through its gills and rests there until it matures. It then changes sex from male to female, detaches itself from the gills and moves to its tongue where it takes permanent residency. It is the only known organism to replace an entire organ of its host species, using its powerful bite it sucks the blood out of the fish’s tongue until it falls off. The Isopod then acts as the fish’s tongue, getting first refusal on all its food but still allowing the fish to eat enough to survive.

Mutualism is a relationship between organisms from two different species in which both of the organisms benefit from the relationship.

Whilst diving along a sandy bottom; you may have come across the mutual relationship between the Shrimp and the Goby. Sharing their living quarters and operating with close communication, these guys operate with perfect synchronicity.

The Shrimp is nearly blind and as it burrows through the sand to find food to bring back into the burrow, the Goby protects its vulnerability by acting as its eyes and bodyguard. The Shrimp keeps in constant contact with the Goby, keeping its antennae in line with the Goby’s tail. When predators come close the Goby alerts the shrimp by wiggling its body and moving its dorsal or tail fin up and down or left and right in different frequencies, and together they simultaneously drawback into their sandy burrow.

The Goby requires a safe nest to complete its lengthy mating ritual and benefits from the Shrimps superior burrowing skills. The two sleep in the burrow together every night.

Predominantly found in the Indo Pacific region, you can witness this elaborate partnership within the Red Sea, Thailand and Indonesian waters and many other dive spots. It occurs between around 20 species of Shrimp associated with 130 different species of Gobies.

Symbiotic Relationships & the Evolution of Organisms

Within these examples, you can see how different organisms can provide each other habitat, nutrients and generate new functions, characteristics and behaviours. Symbiosis produces evolutionary progress that independent organisms cannot achieve, with species often covering the others deficiencies or shortcomings as we can take from the ‘Shrimp and Goby.’

Here the shrimp has used the goby as a tool, (and vice versa) to give itself a stronger chance of survival. As the evolutionary changes for the shrimp to act alone could take thousands of years to develop, his incorporation of the Goby gives him an evolutional shortcut.

Symbiosis occurs in so many fascinating ways throughout nature and there are many examples that we can witness whilst diving, even the reef-building corals we see are symbiotically partnered with a type of algae that lives within its tissue. Take a moment when you are next diving to inspect a few relationships and see if they’re an example of Symbiosis!

Get the latest deals straight to your inbox.

My first dive was in 2001 at the age of twelve, My Dad is a Divemaster and he joined me on a try dive in Spain where I absolutely fell in love with the underwater world. Later on in my early twenties I was certified in Egypt and my Father and I regularly took diving holidays together. I became obsessed with fish ID and soon realised that I needed to live somewhere I could dive as often as possible.

At 27 I sold my shares in my company based in the UK and moved over to Thailand to the Similan Islands to complete my DIvemaster course. The liveaboard lifestyle lit my soul, I worked in Koh Tao during the West of Thailand’s monsoon season and then returned to my life in the Similan Islands for another season before travelling to Australia, New South Wales. Here I joined the Reef Life Survey team in surveying the local reefs whilst I continued to fun dive out of my back yard, developing my passion for underwater photography. This was my first experience with temperate water and some pretty intense shore dive entry and exits, I’ve loved adapting to different environments and learning the species that come along with them.

The next part of my professional dive journey is completing my instructor course on the Great Barrier Reef, whilst continuing to expand my survey skills through citizen science and conservation projects.

Many of us have been conditioned to fear the Great White Shark (Carcharadon Carcharias), by a repetition of two musical notes and a series of bad movies. As more research shows, and Peter Benchley's apologetic book "Shark Trouble", attempts to rectify, the reputation as a...

Something stirs in the part of the southern African continental shelf known as the Agulhas Bank, where the warm Indian Ocean and the cold Atlantic meet. With a myriad of theories circulating about what exactly stirs, from the ideal temperature spreading up the coast between...

Book to Dive. Help Save our Oceans

You're moments away from booking your dive